Congratulations to Stasia, Aes Sedai of the Green Ajah!

Congratulations to our newest Aes Sedai of the Green Ajah @Stasia t'Andrei !

Stasia was rededicated at a Green gathering this weekend 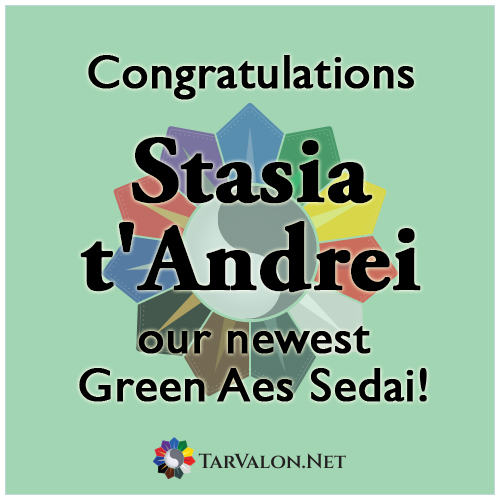 Here are some words of support from her Ajah:

~I first met Stasia many many years ago and immediately recognized a Green. The way she carried herself stood out immediately and without introduction I saw Stasia as a Green and assumed that she was an Accpeted I just didn’t know.

When I realized I was wrong… well Stasia dear, it wasn’t me who was wrong…

Stasia exudes natural leadership qualities that manifest not as bossy but instead as a strong woman who understands her value. Since joining Green she has been a one-woman force, livening things up daily and offering her creativity and know-how to the ajah. It always confused me that Stasia wasn’t a Green and I will be proud and delighted to welcome her home, finally. ~

~Green has waited a loooonng time for this one. Yes. Yes. Yes. There has never been a doubt that she belongs here and I am super proud to welcome her into a Green shawl. ~

~Yes, absolutely! Stasia has been such a big part of the Ajah for a while, and it's about time we raise her! Looking forward to welcoming her home.~

~Stasia has been a positive and contributing member of our Ajah ever since she set foot in the Sitting Room. It was pretty obvious to a lot of people, both inside and out, that this was her home. Maybe even before she realised it herself. I'm happy she found her way home. So put that shawl around her and give her the key to her quarters

~While I've known Stasia for awhile, I've gotten to know her better over the past year or so. She's so Green! It's time to bring her home where she belongs! I look forward to Stasia gaining full Green status! ~

~Considering I called dibs on her years ago, it really was just a matter of time. Might as well make it official, especially since I'd be there.

Also, she's Green as f*** and we deserve to finally claim for realsies.~

~From the day Stasia started guesting, she brought so much energy to the boards and the discord. She's an absolute delight and I will be thrilled to officially call her a Green Sister. ~

~She is one of us. Like without a shadow of a doubt. Since the very beginning of her guesting and before that. I keep forgetting she isn’t “fully” one of us. Get’r done.~

~Stasia has been a part of us since she stepped foot in our Sitting Room. She's brought joy and innovation with her, and she's fit in seamlessly. Bring our sister home!! ~

It's about bloody time.

Welcome home, Stasia. We have waited LOOONNGGGGG for you

This is so wonderful! Welcome to the Green Shawl, Stasia.

Finally! Welcome home, Sister, we have waited long for you!!!!

Those comments were awesome! Many congratulations to Stasia and to Green!
library@tarvalon.net

Do you wish to contribute to the Library? Email or PM me!​

Congratulations Stasia Sedai and the Green!

Congratulations to you and Green!!!
RL Mother of Elyss Koh'inor

First Sister to Siera and Polegnyn
Bonded to Brandon Tat'vakja

Congrats to Stasia and