Nadezhda al'Lanahrin said:
In this episode, I think we finally see Moiraine starting to lose her normal serenity.
Click to expand...

The problem is, we always see her crying or sad, we haven't witnessed the Aes Sedai calmness yet that much, not even from other Aes Sedai even, except Kerene Nagashi. I hated to see Siuan and Moiraine wanted to keep the relationship secret but they literally cried at the Hall of the Tower, in front of all those Sitters... I wonder how they kept that secret for that long if they were really bad at keeping it a secret.

I think the tearing up in the Hall was meant for the TV audience, not the other sitters. Like the whispering. It's almost an "aside" to us, rather than something you'd expect the rest of the people there to see. I'm okay with Aes Sedai serenity being pulled back a bit, because we can't see what people are thinking in the show. It would be really boring to watch a bunch of stone faced people emoting nothing for hours!

Also... as much as Aes Sedai are supposed to be serene in the books, I think we see many examples of them losing their cool and not being serene at all.

So perhaps it's not a completely departure anyway.


Morgana Arakos said:
I think the tearing up in the Hall was meant for the TV audience, not the other sitters. Like the whispering. It's almost an "aside" to us, rather than something you'd expect the rest of the people there to see.
Click to expand...

it seems that they really 'nerfed' Aes Sedai in the series. I mean, they are Aes Sedai, if Siuan and Moiraine were to look each other's eyes more than one second than it's necessary, others would understand something was going on, you know.

To be 100% honest here, after a decade of working on my emotions for my own mental health, I completely support the show not championing suppressing emotions.

Green Aes Sedai | Online Events Coordinator - onlineeventstarvalon.net@gmail.com | Wise One | Spam Dragon | in Jahily's Pocket | Married and Bonded to Ignis
Nadezhda is my Daughter Pocket | Satara lives in and sublets my brain, so I Bonded her | Lyndo's Co-Conspirator | Merena is my Mini-Me
First-sister to Alora, Ahmyra, Cattrin&, Dar'Jen, Seryse, and Padron​

So my biggest issue with this episode (and I know it has already been discussed) is Matt getting healed of the dagger. I feel like they are missing a huge part of the story, especially Padan Fain. The fact that there was no encounter with Mordeth and then the dagger being separate so easily just kind of makes the whole Padan Fain/Ordeith story kind of blah. I think there was such a huge opportunity for character development with this. I think there are ways they could incorporate it, but who knows.
:vc

:vc
"Mercy is the mark of a great man..(stab)Guess I'm just a good man...(stab)Well, I'm all right. Mighty fine Shindig"
Gaidin of the VC - Proud Former Mentee of Alora Sedai (Yes, that long ago) and Padron Gaidin - Del's Buddy! - Shen'din of the BotRH​

Leala ni al'Dareis t'al'Caleum said:
To be 100% honest here, after a decade of working on my emotions for my own mental health, I completely support the show not championing suppressing emotions.

The scene is also emotional because Moiraine is getting exiled from her home and her Sisters, so they would expect her to loose her serenity imo
Heart of the Brown Ajah | Mayor of Tar Valon | Mentoring Viktara
Contact me: E-mail, PM or Arella#1913

Leala ni al'Dareis t'al'Caleum said:
To be 100% honest here, after a decade of working on my emotions for my own mental health, I completely support the show not championing suppressing emotions.

Indeed....I spent years trying to 'Sedai-up' and I think it made my mental issues worse....
​

Regarding Mat's healing, I heard someone else point out that Moiraine does partially heal Mat in the books without everything being completely healed (TEotW ch. 41-42), and that tracks with what we saw on screen. She does mention something along the lines of him still being in danger (I can't check for the exact wording because I'm at work). We haven't seen the resolution of what Fain was doing in Tar Valon, so I'm going to guess we still get the dagger-chasing story line or something similar.

As for Moiraine and Siuan's get-together, my original theory was that the matching portraits were ter'angreal that led to a mirror/alternate reality similar to what we see with the tests for Accepted and Aes Sedai, only with the control resting with the people inside the ter'angreal. It seems strange to me that they've made them doorways with specific Traveling instead. As Axis pointed out, the extra info listed on the show's webpage Explore timeline says, "Moiraine utilized the ter'angreal in her room to open a gateway to a riverside hut in the Fingers of the Dragon Delta, where she met with Siuan Sanche, the Amyrlin Seat." And then in the artifacts section on ter'angreal, "Others can act as doorways between places".

My questions then become: Are they keyed to that very specific location? If so, wow, what a coincidence! If not, why are they not keyed to more important places?

I have to say, that's one romance that they can just do away with entirely. I could never buy it in the books, since we never got to see anything about it until we saw that letter.


Karassa Souladrin said:
No, the whole point of the oaths on the rod is that they are unbreakable. Aes Sedai CANNOT lie. Even if they want to. That's why Verin saying Egwene's dress was green was such a HUGE deal.

In the books there's a scene where they are hunting for the black Ajah, and one sister swears to obey another, and then when she's being questioned, the sister she swore to tells her "admit you're a darkfriend", but she's not, but she's still bound by the oath to not lie, but also to obey, and the conflicting oaths nearly kills her.
Click to expand...

Ah sorry, I might've misinterpreted - I thought the comment I replied to was about whether a normal, non-Oath Rod oath would've been just as binding. I blame the dozens of Reddit discussions I've seen about

Axis m'Troutilas said:
And if the reason is that the actor left they changed the story line. Then that’s a terrible decision. You can’t let out of show stuff influence a script like that to that degree.
Click to expand...

I agree that it's not a very good situation, but I honestly can't blame them. If it is true that he left between episodes 6 and 7, and was already long gone to the point that he couldn't help them do a better change to the storyline, I think it would be even more jarring to have some random stunt double there for 2 episodes that does nothing and says nothing. That would be even more out of character.

As things are now, they could blame it in some post-dagger trauma. Moiraine could say that she wishes he'd had more time to recover after it, that it left deep mental scars, or maybe worry that she didn't heal him sufficiently.
​

Ixialdor Lathanril said:
So my biggest issue with this episode (and I know it has already been discussed) is Matt getting healed of the dagger. I feel like they are missing a huge part of the story, especially Padan Fain. The fact that there was no encounter with Mordeth and then the dagger being separate so easily just kind of makes the whole Padan Fain/Ordeith story kind of blah. I think there was such a huge opportunity for character development with this. I think there are ways they could incorporate it, but who knows.
Click to expand...

I agree - they should have had Padan Fain show up in the episode a bit more, at least.
However, I could totally see them cutting out the whole Mordeth/Ordeith plot line - that kinda went nowhere.

Did anyone else see this quote? Can we have a pause to appreciate Daniel Henney, who may in fact be the most wholesome human being alive?

How he got into the frame of mind to express grief:

I remember thinking a lot about… It’s still kind of cheesy, but I had just recently lost my golden retriever. She was 15, and she passed away right in my arms. So I kind of used that memory to help catapult me. Her name was Mango. I’m always thankful to Mango for giving me all these gifts. And I thought, “To this day, she’s still helping me.” So she did help me that day.
Click to expand...

Everything I've seen with Daniel Henney is amazing. On one interview, Matt Hatch told him that some fans wanted to change from calling it Randland to Lanland, and Daniel LOVED that - he said every word that could be replaced with Lan, should be.

Maibella ni Rhoiden t'al'Varrak said:
- he said every word that could be replaced with Lan, should be.

Having only read the first four books and pausing the episode during the opening fight scene, I was a little sad to be spoiled on who the identity of a certain pregnant Aiel warrior was, as we have only heard the name thus far through four books. 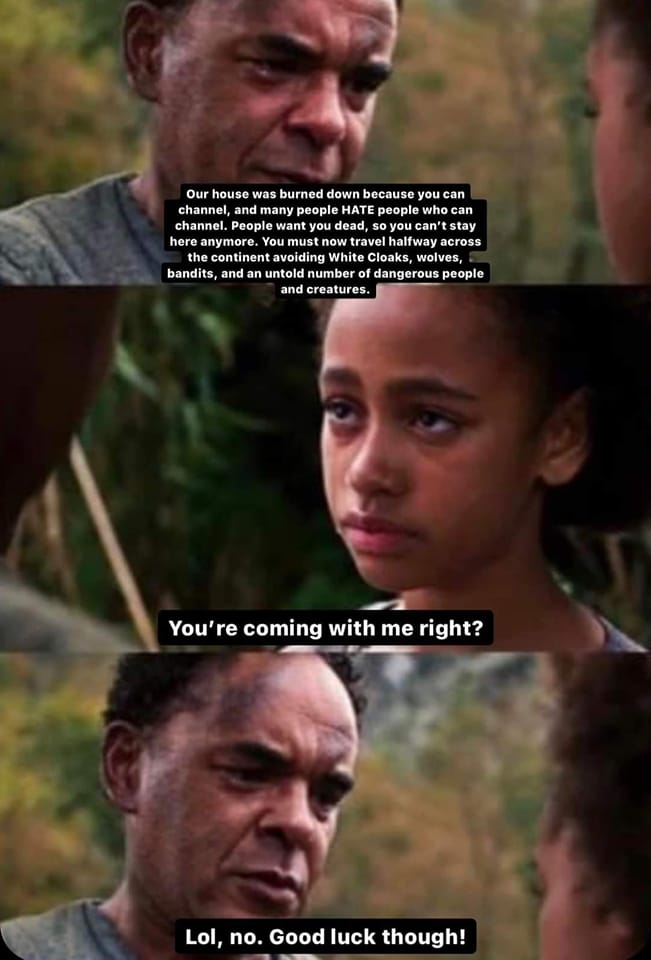 Scribe of the Glitterati

One thing I didn't really like is how young Siuan is in that first scene. Isn't she and Moiraine supposed to be like 16 years old when they enter the Tower? That child looks more like...8. Found out the actress is 7, so, yeah.
"Never doubt that a small group of thoughtful, committed citizens can change the world; indeed, it's the only thing that ever has." -- Margaret Mead

What practical impact does it have on the story, though? In the books, novices aren't accepted (usually) once they're too old because they're too independent by that point. Letting novices start younger, especially if they've already started channeling, could fit in with that dogma.